Photo of the Day: Tristen 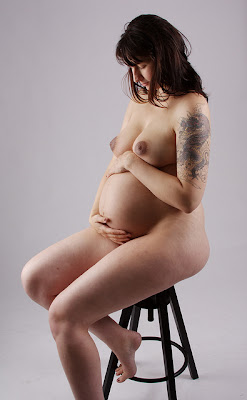 Tristen, originally uploaded by the light is all.
In early October, I had an opportunity to spend an evening in Seattle practicing portrait photography in a studio, with real studio lighting and a local model. I had taken a class, just a few weeks before, from another Seattle studio, in which I learned the basics of how studio lighting worked, how to adjust it, and how to meter for it, so I was eager to put those lessons to practical application. This particular session was to be with Tristen, who was 37 weeks pregnant with her first son, Finnigan, and was to be a session of fine art nudes.

Anyone who has followed this blog for any length of time at all knows that I love portraits of pregnancy. There's a poignancy about them that resonates with me; perhaps it's the whole "mystery of life" thing, blah blah blah, or maybe it reminds me of the feelings of wonder I felt when Kelli was pregnant with our own two sons. I also think that there are just a lot of elemental emotions associated with pregnancy that are compelling to witness in the faces of the women involved. There is a sense of mystery, but also, variously, pride, wonder, expectation, fear, and often all of these and more all wrapped up in one. I also love the way light looks on the rounded shape of a woman's figure.

In my opinion, a nude portrait accomplishes many of these same things. There's something fundamental about an image where the human body is the subject without the distractions of clothing and fashion. Clothing is never just clothing--it carries a great deal of symbolism along with it, representing simplicity, poverty, wealth, status, comfort, visual resonance or discord with other items in the frame of the photo, so many different things. These can enhance the effect of a portrait. But nudity, too, is a symbolic costume, one that carries meanings of humanity, simplicity, freedom, vulnerability, and many others as well as sensuality. In an image like this one, it can, in my opinion, help the photograph to transcend its place in time, to become not just a specific portrait of a specific woman but a universal representation of all women, of all pregnancies.

And yet, the face, included in the portrait, and the intricate tattoo on Tristen's arm, also make this photograph personal and intimate. The look on her face is relates her own experience, and it's a wonderfully ambiguous expression that makes you wonder what, exactly, that experience might be. 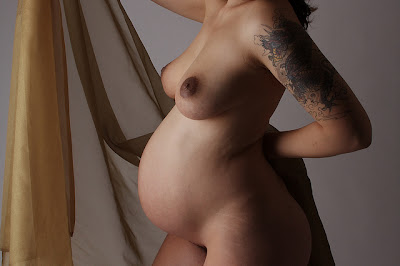 Tristen, originally uploaded by the light is all.
Posted by Kevin at 8:00 AM